A rollercoaster ride with an incredible finish.

If you've watched any reality fashion program where tailors or dressmakers create a garment within a strict deadline, you'll have some understanding of the immense pressure that this can create. The increased probability for mistakes, the trauma of delayed fabrics or accessories, the weight of an anxious customer bearing down on you... it's a real nail biter to experience. But it always makes for a good story.

Dominic's suit is one of our best stories. He came to us with a vision for his 21st birthday suit. "Something a little out there," is how he explained it.

After almost no deliberation, Dominic settled on one of the most out-there cloths we at Beg Your Pardon have worked with. Imagine the kind of suit Jared Leto would choose to wear to the Oscars if you let him make that decision after also letting him rack a few grams of pure Colombian.

Then step it up a notch. 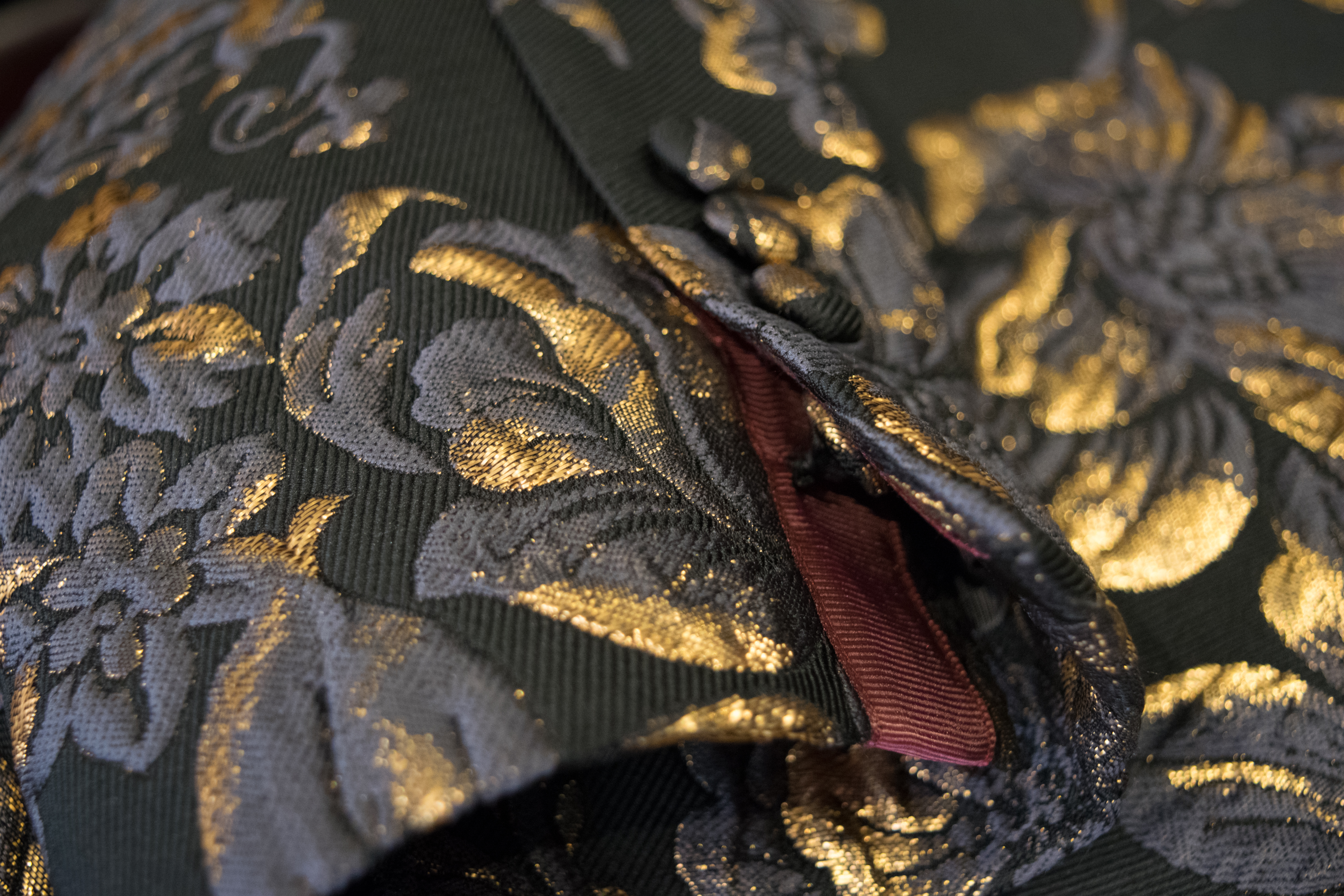 A black cavalry twill fabric with intricate gold and silver embroidery all over it; a show-stealer even as a swatch. All the way from Como, Italy, this fabric is milled by the world-class textile experts Carnet.

While we knew from the word go that it would look great, our lofty expectations were to be wildly surpassed. The only problem: his 21st was in a fortnight and the fabric was still in Como, Italy. (FYI a typical turnaround time for a suit is approximately five weeks.)

We conveyed the risks to Dominic, explaining that all starts needed to align perfectly to pull this off. There was a 50/50 chance we'd make the deadline.

We knew that the pandemic had caused some delays to shipping cloth from Italy, but this time was an exception. It took 2 days longer than usual to arrive.

Four tailors worked on the garment over four days and were able to dispatch the finished garment only three days before the deadline. Normally, this would mean zero chance of it arriving in time. The suit was scheduled to land in Sydney (which was in lockdown) at some unspecified time on Friday morning. From Sydney it would be road freighted to Melbourne (Saturday morning) and then road freighted again to Adelaide (by Monday), arriving 2 days late for the 21st. Shit.

Corona meant that DHL could not put the suit on a plane, claiming they had no planes going from Sydney to Adelaide between Friday morning and Saturday afternoon (I call bullshit, but whatever). In any event, DHL's prognosis on a timely delivery was not positive.

But Dominic was a man with a mission.

With more than 10 phone calls to DHL, it was finally confirmed that the garments would land at "a DHL depot in Sydney" on Friday morning at 11am... but no guarantees, of course.

Now, I don't want this to sound like Pack & Send sponsored content, but they would soon become the unlikely heroes of this story.

Dominic arranged for Pack & Send to have one of their drivers intercept the package when it arrived at DHL in Sydney. I would email that driver an Authority to Collect form just as he would pull into the DHL facility.

This driver would take the suit to Sydney Airport; where a different Pack & Send rep would then fly with the suit as carry on luggage to Adelaide and hand it to a colleague at Adelaide Airport, who would then drive it to Beg Your Pardon, arriving at the store at 8pm on Friday evening.
Just enough time for me to do a final fitting on Dominic.

Dominic wore the suit to his event. The rest is history, with this blog post (and some outstanding photos) to serve as a reminder of the two weeks leading up to Dominic's 21st. Congratulations, mate.

This began and ended as a passion project for us, because it isn't every day that we're able to make such a wonderfully unique commission.

Dominic has graciously allowed us to display his suit in the store for a while. If you're in the city, be sure to pop your head in. It looks even more impressive in real life.